TFV Project: A New Outlook for the World

Homepage TFV Project: A New Outlook for the World

TFV Project: A New Outlook for the World

Twenty-one year-old Laura from Dwere village in Gulu District is a survivor from the LRA War that ravaged Northern Uganda for two decades. During a devastating bombing by rebels who attacked her village, Laura lost her father. Laura herself suffered eye damage as the smoke engulfed her family compound.

Laura vividly recalls her mother washing her eyes out with cold water in an effort to soothe the resulting pain and itchiness. The injury impeded Laura’s ability to sleep and when she started primary school, she struggled with vision problems that affected her ability to perform well. 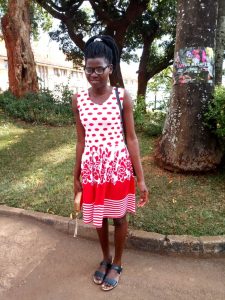 In 2002, she was referred for medical assessment at Gulu Regional Referral Hospital as her vision condition worsened gradually.

I could not see any letter on the wall, and they had to change the finger counts and the distances were varying from 3 metres to 2 metres for the right eye. On the second day when I went back to the hospital, the same procedure was conducted and I was able to see a distance of 2 metres (left eyes) and 1 metre (right eye).

Laura learned that her vision required special contact lenses that were not available in the Optometry Department. More than a decade later, in 2016, her condition deteriorated further, causing her to be classified as legally blind. In secondary school at the time, Laura could not see any writing on the board, and resorted to listening to lessons and later painstakingly copying notes from colleagues.

As part of the Trust Fund for Victims Project that sought to rehabilitate war survivors struggling with physical injuries and psychological traumas, Laura was taken under GWED-G’s care as a beneficiary in 2018. As a result, Laura was taken to the Benedictine Eye Hospital in Tororo, in Eastern Uganda, where she underwent numerous assessments. She was diagnosed with keratoconus, astigmatism and short-nearsightedness and referred to AGARWAL Hospital in Kampala for a corneal transplant. While awaiting surgery, Laura was in dire need of an immediate solution to help her continue to study for her upcoming A-level exams. GWED-G was able to provide Laura with special glasses imported from Nairobi within 3 weeks.

With great pleasure, I want to thank GWED-G/TFV for the efforts… I am so grateful because I know that my sight is going to be restored, and this will improve my performance at school.

Upon follow-up with Laura, we learned that she passed her A-levels at Sacred Heart Girls School in Gulu with flying colours, in spite of her visual impairment. Laura was accepted into Makerere University on government sponsorship to the Faculty of Meteorology.